Hello, dear Otakus, please put your seat belt on and be ready to dive with me into a deep anime world! As for today, we will be giving some examples of the best top10 school life anime.

Which is a slice of everyone’s life, You Just Don’t Know It Yet But School Is One Of The Best Places In This Planet To Exist Peacefully.

Let’s start those 10 steps in our article of today the list is fun! And I’m sure it will bring some good memories that once were a slice of life in school… 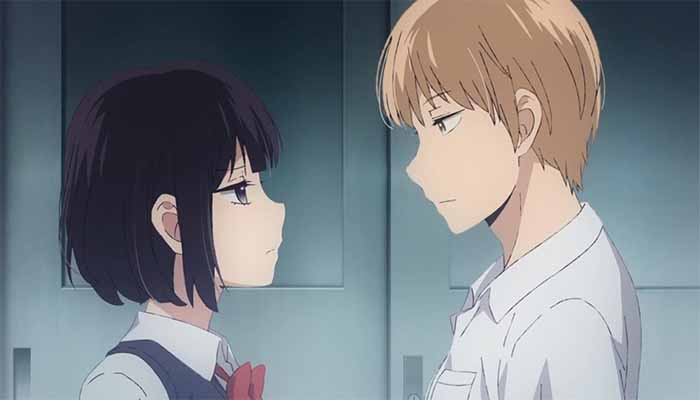 This is a painful and realistic view of human relationships! beautiful in both its fragility and startling realism, to be honest, it is directly intended for more mature audiences, beyond the theme of love and sexual awakening!

The show touches on discovering and accepting your true and authentic self. Eventually, the story in Scum’s Wish is emotionally satisfying! Yet heartbreaking, so if you are looking for a happy ending story!

This anime is probably not for you! But if you like the dramatic heartbreaking stories then you have it in this school life anime… 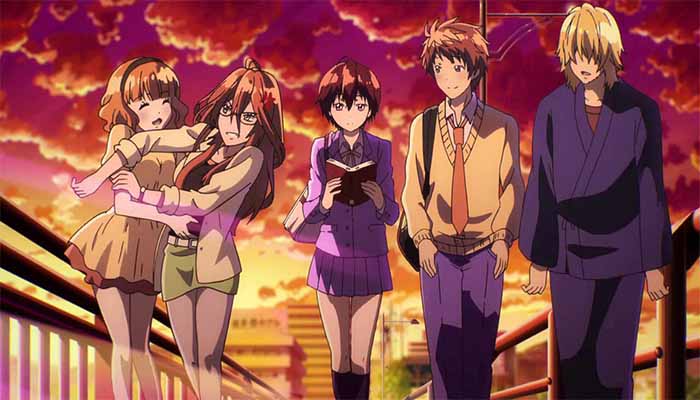 This anime is quite simple and cute to watch! So if you just finished an anime under too much pressure you might need a break from all that complicated themes.

However, the story is about KAZUNARI USA who is living on his own in a boarding house, and in the Kawai complex with all that he desires! you will love to watch this school life anime guys… 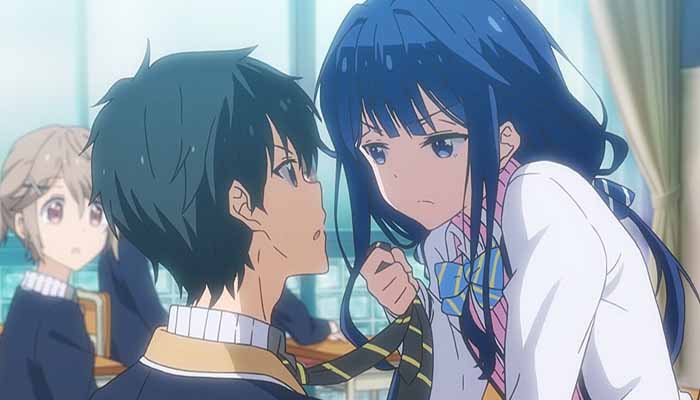 As an overweight child, Makabe was mercilessly teased and bullied by one particular girl! Adagaki!

He was determined that one day he will have his revenge upon her! He started a rigorous regime of self-improvement, and personal transformation, years later MAKABE re-emerged as a new man! Handsome, popular with perfect grades and become good at sports.

He is unrecognizable to her! Now it’s the time to confront this girl who bullied him for years, it’s an amazing school life anime show. guys, you will love it if you are a fan of such school life anime themes… 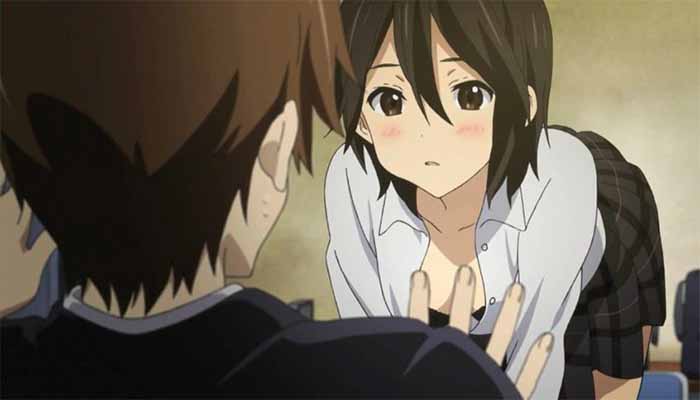 At Yamaboshi High, joining a school club is required, so when Himeko, Lori, Taichi, Yoshifumi, and Yui couldn’t find a suitable choice! They decided to create their own, the school culture club!

Together they spent days meeting and coming up with topics for the group’s newspaper until one-day Yoshifumi and Yui proclaim that they switched bodies last night!

It’s a very good anime to watch if you are looking for such a school life anime. This show might surprise you so give it a chance guys… 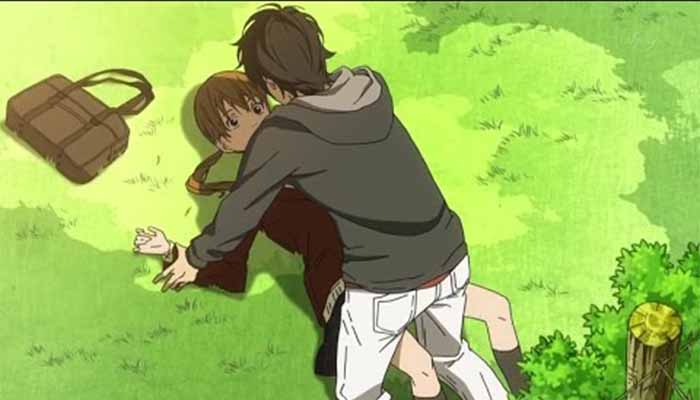 It all started when an impassive girl meets a trouble maker in a brand new love story!

after Mizutani a girl whose sole interest is studying asked to deliver some handouts to Yoshida!

A boy who hasn’t come to school after spilling blood on the first day, she finds herself a target for his affection! It is a story about those two youngsters struggling with love and friendship.

It’s hard to open up yourself to other people because they force you to be honest with your own self.

5. Wotakoi: Love is Hard for Otaku 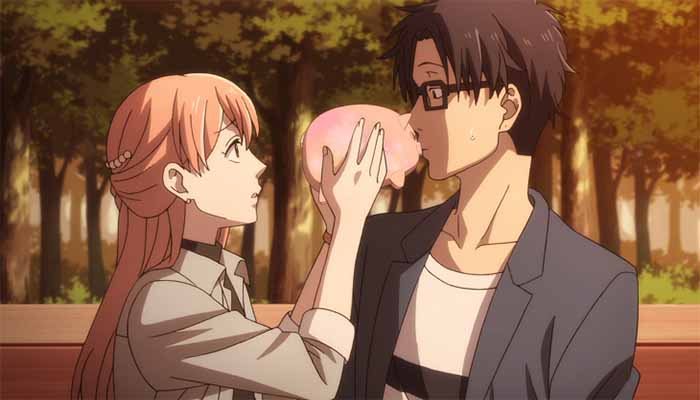 It’s about a girl with an anxiety problem, she loves anime and she always tries one of the different personalities that she has watched!

Many people wouldn’t take this anime show seriously but many others will like it! So for that reason we only suggest and you are the judge, you can always tell us what you feel and what you think in the comments section!

However, this school life anime doesn’t have any action, it basically deals with a slice of life in high school, so you might like it and you might not! 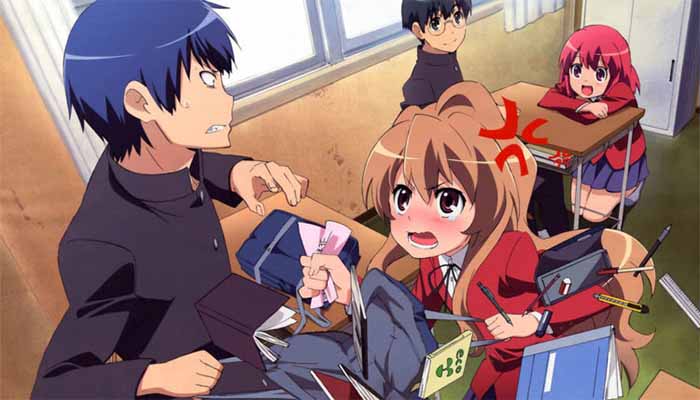 This school life anime TV show tells the story of Ryuuji and Taiga’s friendship. The domestic, level-headed Ryuuji has fallen for the vivacious and optimistic Kushieda Minori, childhood friend to Aisaka Taiga. The tsundere Taiga, meanwhile, crushes on Ryuuji’s upbeat buddy, Yuusaku. When Taiga and Ryuuji discover their coinciding interests, they form a friendship around gaining the affection of each other’s friend.

Overall, this is a good school-life anime, and all the events that happen in school, friendship, love stories, bullies all the normal stuff in school life.

3. Rascal Does Not Dream of Bunny Girl Senpai 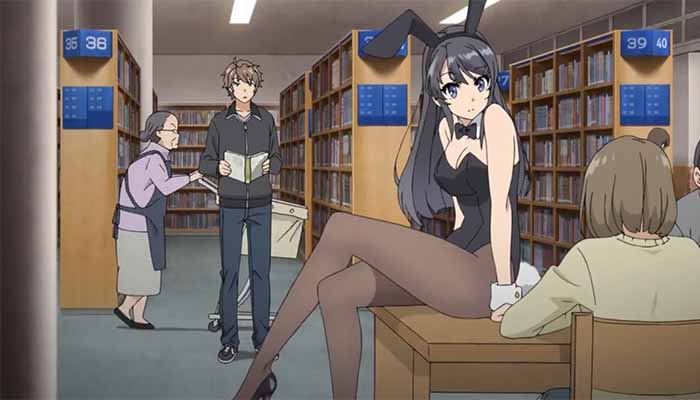 Puberty syndrome, abnormal experiences rumored on the internet to be caused by sensitivity and instability during adolescence, this year, Sakuta a second-year student at a high school near Enoshima!

When he meets several girls that are experiencing this Puberty Syndrome! For instance, he meets a wild bunny girl in the library, she turns to be an actress on hiatus, Mai Sakurajima, who is also his senior at the school.

Somehow she wasn’t invisible but now he sees her! It is a good school life anime with a slice of life in it! Go for it guys and please tell us in the comments section what you think about it? 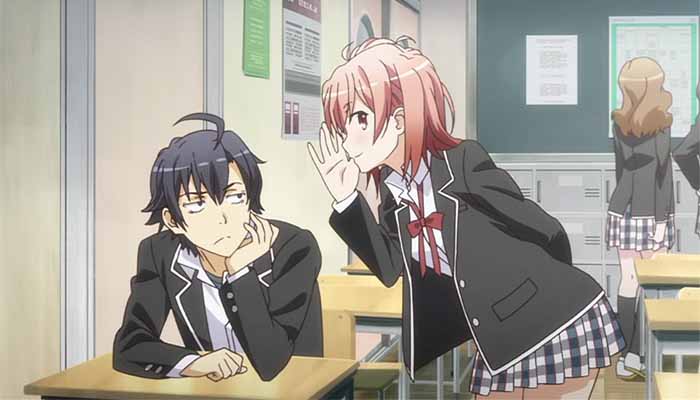 After he was turned down by his Crush Hachiman Hikigaya is determined to live the rest of his high school life single like a piece of rock in the rever!

He wanted no more of that society! But Hachiman’s resolve is lacking compared to his guidance counselor, a woman determined to change the boy’s ways!

Hachiman was forced to reach out to those around him by joining a club dedicated to serving others! Alongside the cold beautiful president Yukino and other new friends, Hachiman will be always intimidated by another futuristic turndown. 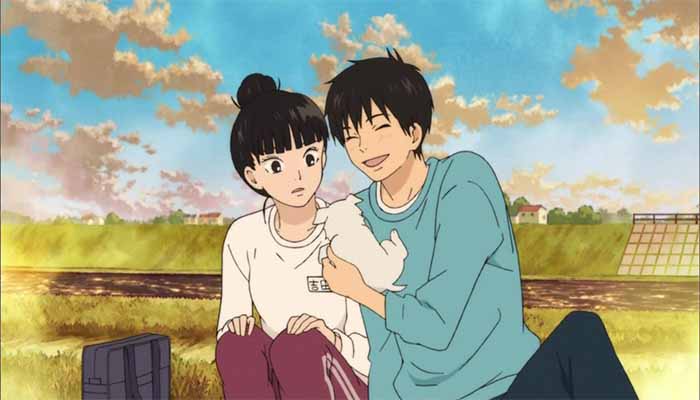 Usually, when you are in high school u only want to make friends and be useful. That’s all that Sawako wants!

The only problem is she bears a worrying resemblance to Sadako from ^The Ring^ because of her reputation, people are terrified by her! even the dogs bark in fear of her presence!

In fact, the only person who is brave enough to talk to her is Shouta this cool character! So they spent more time together and they became closer, and some heartwarming feelings will emerge between them.

If you did! you can also check our channel down below. And watch tones of videos where we recommend some of the best lists of manga, manhwa, and anime.

Video Games World Records That Nobody Can Break

Top 10 Martial Arts Manhwa That You Must Absolutely Read