The Best 10 Anime With Card Games That You Must Watch

The Most Amazing 10  Anime With Card Games To Enjoy Watching

Isn’t it true that combining anime with card games makes the show more interesting? Because they are fascinating to watch, such shows are getting increasingly popular. It’s a fantastic pleasure to witness our favorite anime characters interact with card games.

Cards signify tradition; some anime-inspired trade cards, such as Pokemon, exist, while other anime, such as Yu-Gi-Oh!, incorporate a card game that is integral to the plot. Yu-Gi-Oh! not only became a genre mainstay, but it is also one of the most well-known anime with card games of all time.

So, if you love watching anime like Yu-Gi-Oh! and Bakugan, buckle up because this list is all about anime with card games.

So, without further ado, let’s get started. 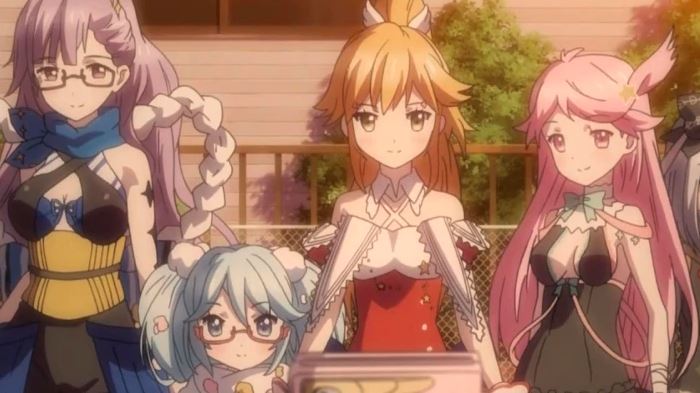 This twelve-episode anime with card games follows Uzume Uno, a young student, and former trading card game champion. She is handed a strange device housing the spirits of five powerful dolls known as the Fantasistas. These dolls are sentient virtual creatures who dwell in cards that have been taken over by their new ruler, Uzume.

This anime with card games is a charming show that combines two famous anime tropes: wacky science fiction and cute magical heroines. It was developed by Amber Film Works and TOHO Animation and broadcast during the summer of 2013. It has 12 episodes and will air from July 7, 2013, to September 29, 2013.

This anime with card games was released in the fall of 2021. The story takes place in a dystopian Kyoto controlled by a “King.” This King tests his citizens by allowing them to participate in the Build Divide trading card game. Moreover, if someone beats him in Build Divide, the King promises to give them everything they want. To even be considered for an audience with the King, one must first compete in a tournament. Teruto Kurabe, our MC, arrives and offers to beat the king in order to fulfill his wants.

Build Divide: Code Black is a 12-episode anime with card games that has an excellent card-trading premise. So, if you like anime with cards, don’t forget to add this to your list. 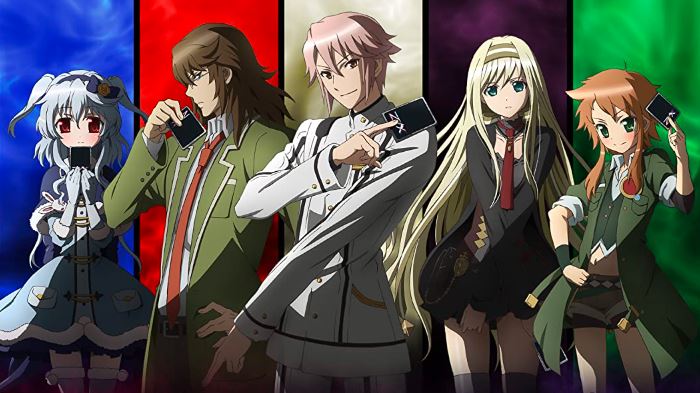 With only 12 episodes, this is a short anime with card games. Despite being a brief show, it has fascinated everyone. Because of its theme and storytelling, otakus from all over the world like it.

Portals to alternate worlds begin to emerge, and strange creatures penetrate the human realm. From these five Black Points, five invading armies arise to fight each other and destroy the other universes. While the ending is predictable, the plot is unique, combining mystical and action elements to create a one-of-a-kind adventure. Furthermore, the action is fast-paced and entertaining, and the conflicts are superbly represented. Overall, hands down, this is an anime with card games that you must watch. 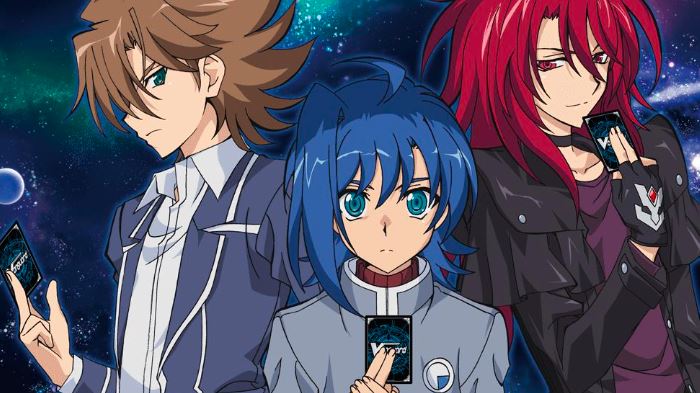 Vanguard takes place on a new planet where everyone is addicted to a card game that is spreading faster than the CoronaVirus. This pattern may be found not just on Earth, but also on other planets.

This anime with card games focuses on Aichi Sendou, a young kid who is often bullied due to his appearance, but his life changes when he acquires Blaster Blade, a rare and valuable card. When his favorite property is seized, he will go to any extent to regain possession of it. Aichi then challenges the thief to gaming combat.

This anime with card games have been compared to Yu-Gi-Oh! The interplanetary element, on the other hand, lends a sci-fi flavor. It’s exciting to see new cards released during the series, and some characters have even appeared in other series. 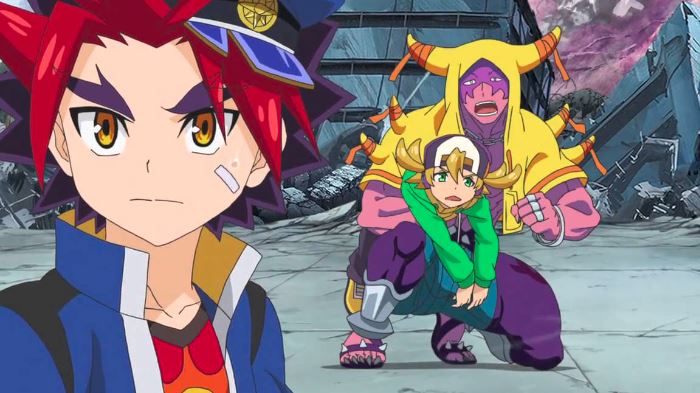 This anime with card games is based on the same-named game and is one of the best card game anime. The story of this anime takes place in a more advanced version of the present day. The card game uses unique cards that function as portals to access a parallel universe.

This anime with card games, which blends aspects of science fiction and isekai with the trading card game genre, is a fascinating title that will appeal to individuals of all ages. The characters build alliances, become friends, and engage in a variety of enjoyable Buddyfights with other players. With almost sixty episodes since its debut in 2014, Future Card Buddyfight has acquired a passionate fan base. This is a good pick if you prefer viewing anime with card games. 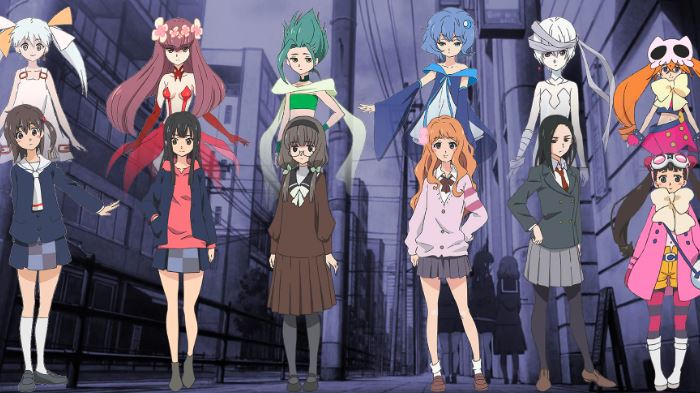 Number five is Selector Infected WIXOSS, a lovely anime with card games based on this game. Selector Infected WIXOSS is a popular trading card game in which players use fighters known as LRIGs to battle one other. Ruko Kominato is the story’s protagonist. She becomes a Selector after acquiring Tama, an LRIG. As they follow Ruko’s struggles and exploits, viewers will be reminded of the dark and terrifying truths of the WIXOSS universe. Put on your headphones and start watching this fantastic anime with card games if you want to understand more. 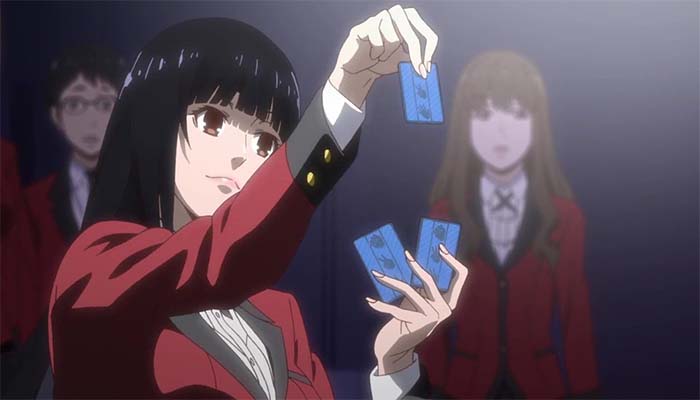 Kakegurui is ranked fourth because it shows the horrors of gambling. There are many different types of gambling, and after watching this anime with card games, you will be introduced to a whole new world of gambling.

The plot of this anime with card games revolves around the story of Hyakkaou Private Academy, which educates students from the upper crust. During the day, it functions as a conventional school, with teachers instructing students in a variety of disciplines and languages. At night, however, it is changed into a casino where students are taught gambling and manipulating techniques. Can Yumeko Jabami, the anime’s protagonist, put an end to this madness? Watch the anime with card games to find out.

Related: The best 10 Gambling Anime That You should watch 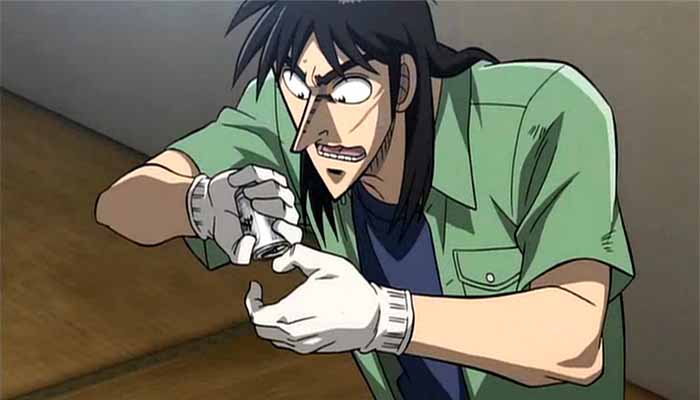 Kaiji is a beautiful anime with card games that demonstrates how terrible gambling can affect anyone’s life. Kaiji chronicles the story of Kaiji Itou, a loser who is obsessed with alcohol. He solely drinks beer and steals things to get more of it. One day, he was misled by a coworker into joining an illegal gambling operation on a cruise liner, and his life was turned upside down the moment he consented. Our MC is now stranded somewhere he will never be able to return.

What will he do now? Can he ever live a normal life again? Watch this anime with card games to find out. 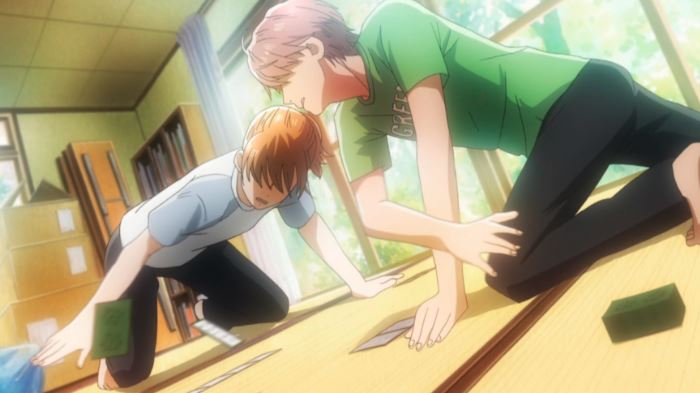 While other anime with card games appeared in the 2000s, Chihayafuru premiered in 2011 and aired from 2011 to 2012. Chihaya Ayase, a tomboy, meets transfer student Arata Wataya, who introduces her to the card game Karuta. They all partake in the game, as does Arata’s buddy Taichi Mashima.

Inspired by the Hundred Poets style of Japanese poetry, Karuta can only be won by concluding the first line of the poem with the equivalent second line. The mix of trade cards and books in this anime makes it both unique and educational. Despite having just 25 episodes, this is one of the finest anime with card games. It is highly known for its unusual character designs, outstanding animation, and intriguing plot. 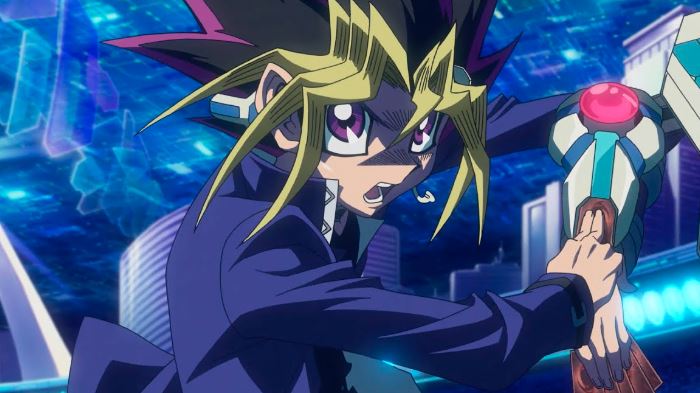 This anime with card games follows Yugi Muto, a modest man who is bullied at school by his classmates. His life was drastically transformed when he solved a problem that no one has been able to answer for more than 150 years. As a consequence of that puzzle, Yugi can now change into a ferocious warrior dubbed Yami, who can teach his bullies a lesson and go to any length to help his allies when they are in danger.

Yu-Gi-Oh! is without a doubt the most well-known anime with card games. The manga was published for eight years and sold forty million copies. The franchise has been enormously successful. With ten spin-offs, four animated movies, and over twenty video games to choose from, it’s tough to grow bored with this classic. Yu-Gi-Oh! cards may still be found in stores all over the world, and their popularity has never diminished. The Duel Monsters and its protagonist, Yugi Mutou, are still remembered today.