The Best Doujinshi/Doujin Manga To Read

Doujinshi or Doujin manga is a popular type of independently produced and distributed magazines/comics, generally made in small print runs that are often written and released by manga and anime fans or artists, they can be long or short stories, some are colored and others not, as most of them are available for free to read and they’re not only monopolist on japan, as artists and creators all around the world can involve in it. Moreover, some famous anime that fans love to watch got their adaptation based on doujinshi mangas like one punch man and ranking kings.

Therefore, if you are already familiar with doujinshi mangas and you are here looking for the one you’ll read next? Then search no more since this article will cover for you a great list of  15 best doujin manga with various genres, stories, and characters…

Dear readers keep it up with us and enjoy the best 15 Japanese webtoon series and make sure you share with us your favorite ones.

Also, you can check: The Best Manhwa Where The Mc Is A Swordsman 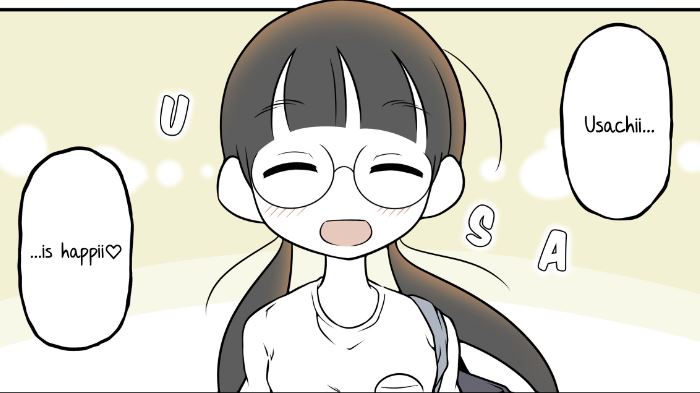 This doujin manga centers around a middle school girl named “Uchida”, who has a lot of unusual obsessions and isn’t very good with people. However, Uchida is a member of the art club girls but it isn’t all fun and games for an art club girl either! From club activities to studying, games to manga, hobbies, BL, and “mufufu” fantasies…or even…love?!

Overall, if you want an excellent Doujinshi manga full of funny moments to read! This one is absolutely for you.

14. Tale of a Girl and a Delinquent Who’s Bad with Women 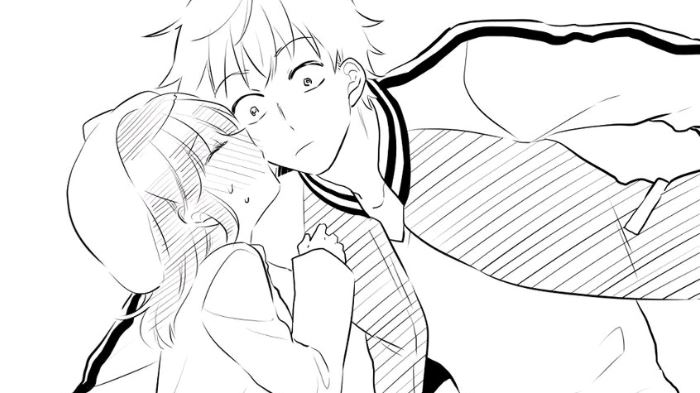 The story of this doujin manga starts when a delinquent is out studying, freezes up, and says violent things about ladies who see a tiny girl in the library. She instructs him, which surprises him because an elementary student shouldn’t be able to. She’s a high school student and his classmate, eager to befriend him. He is also surprised by the fact that he is not terrified of her. Is it because he views her as a child? Does he, or doesn’t he?

Generally, the plot isn’t that good but the artwork is pretty decent, and the characters are well done. So give it a chance and tell us your thoughts about it.

13. The You Next To Me is the Cutest One of All, You, the One Sitting Next to Me, Are the Cutest 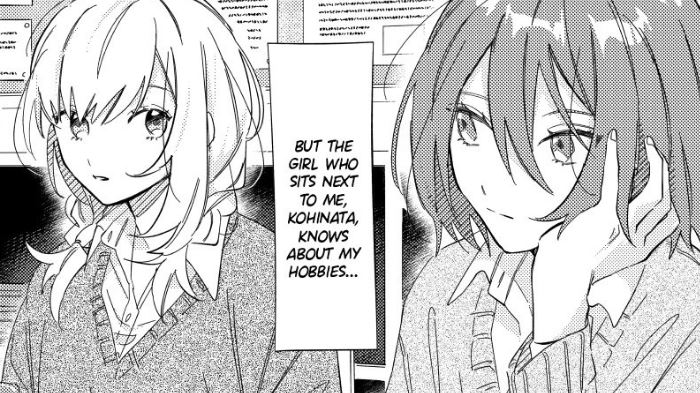 This title is so long, I think they should add a spoiler alert next to it! The story of this doujin manga is about two high school students who sit next to one other and think the other is the cutest one around.

The first is Hoshikawa Yuu, a male who is so cute that many mistake him for a lady, and the second is Kohinata Akari, a student who recently switched her seat next to his. So, give it a shot and let us know who you think is the prettiest. 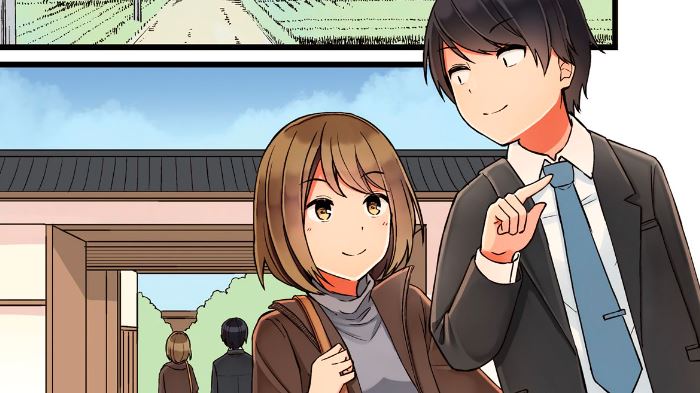 This doujin manga centers around Maki and Tetsuya, an engaged couple! While the things that were once new and exciting to them have since become normal, their connection has grown. This is a fluffy and heartwarming story of their transformation from boyfriend and girlfriend to husband and wife. Moreover, the art is amazing you can clearly see flying emotions and you can easily identify the characters. Overall if you are looking for pretty romance manga? Absolutely this Doujinshi manga is recommended for you.

11. My New Wife is Forcing Herself to Smile 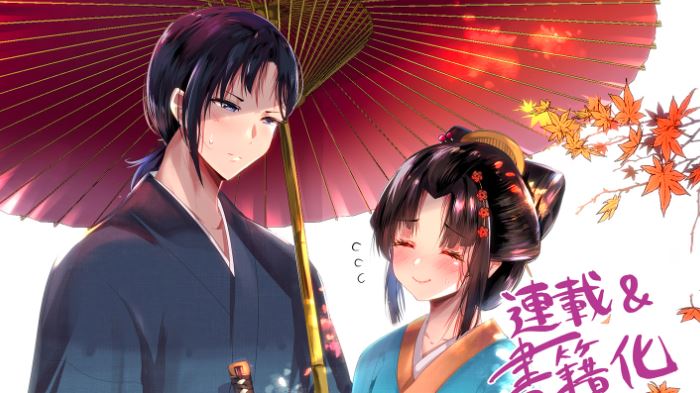 Absolutely adorable doujin manga follows the life of a married couple who are still unaware of each other’s emotions. Set in the historical past of samurai. You will enjoy every panel of this Doujinshi manga. It’s easy to follow, romantic, cute, funny, and wholesome. Expectations going into this read should be to have fun and enjoy a cute married couple going about their everyday lives with romantic twists and misunderstandings. 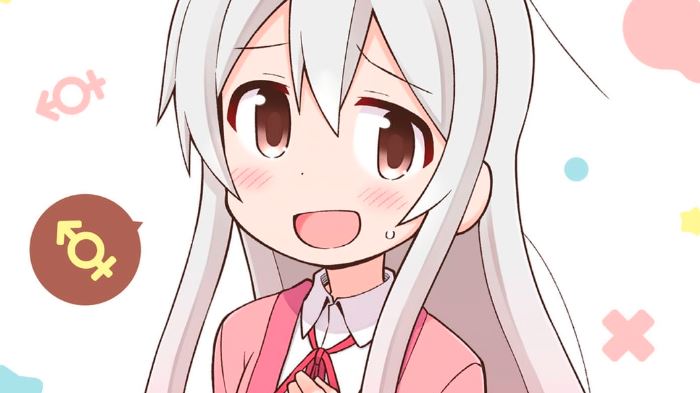 This doujin manga follows Mahiro Oyama, who was a typical erotica fan…until he awoke one morning as a woman! According to Mahiro, his mad-scientist younger sister, Mihari, tried out one of her latest experiments on him…with terrible results! But Mihari is just as keen to study him as he is to return to his shut-in, game-playing existence, and one thing is certain…life is about to become a whole lot crazier from here on out!

Generally, it’s hilarious manga. It might not be for everyone, but if you like comedic gender benders, then you’ll definitely love this Doujinshi manga. Give it a shot to see if you like it or not.

9. The Most Powerful Haunted House and the Guy With No Spiritual Sense 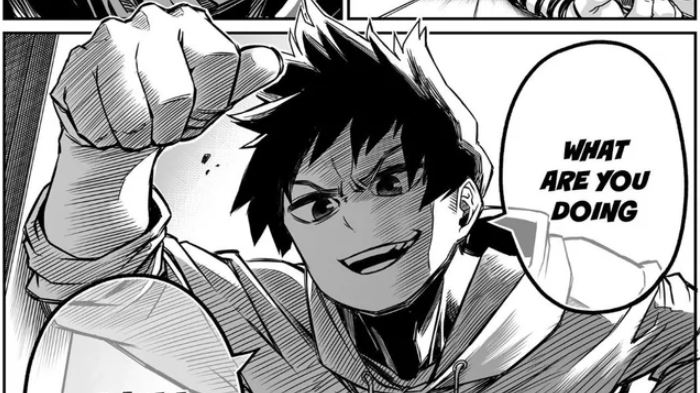 This doujin manga tells us the story of a guy living in a haunted house whilst Kinako-sama, and the earth-bound spirit, who is trying her best to scare the living hell out of a guy who can’t see ghosts.

Overall, it’s a hilarious Doujinshi manga to read, the characters are adorable. Just give it a read, you won’t regret it. 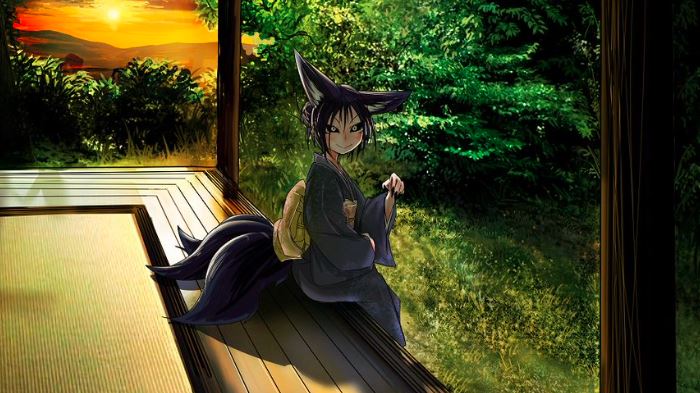 The story of this doujin manga starts when a man in his forties walks to the hills to commit suicide. On the way, he comes across a sealed youkai black fox girl in a tiny cave and she asks him to liberate her, which he does without hesitation and dies, but the fox girl, despite her initial intentions, compels the man to give up and they finally marry. his life seems to take an unexpected turn for the better….or is it for the worse? So give it a read and find out!

7. Beauty and the Beast Girl 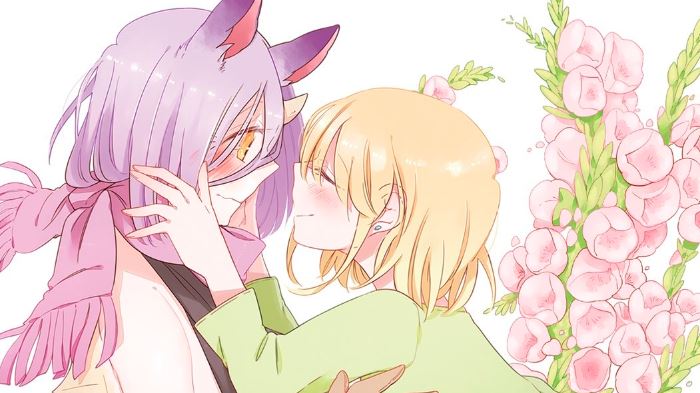 Despite her terrifying appearance, a frightening creature trapped in the forest wishes she could live among mankind. Everything changes when she has a visitor—a blind human girl who is attracted by her enigmatic woodland companion. As the monster and the girl grow closer in their isolated environment, their love demonstrates that beauty is more than just skin deep.

Generally, The plot of this manga is cute, wholesome, and fluffy. The artwork is simple but good enough. Also, the character development is well done. I  recommend this doujinshi manga to anyone looking for a beautiful love story to read. 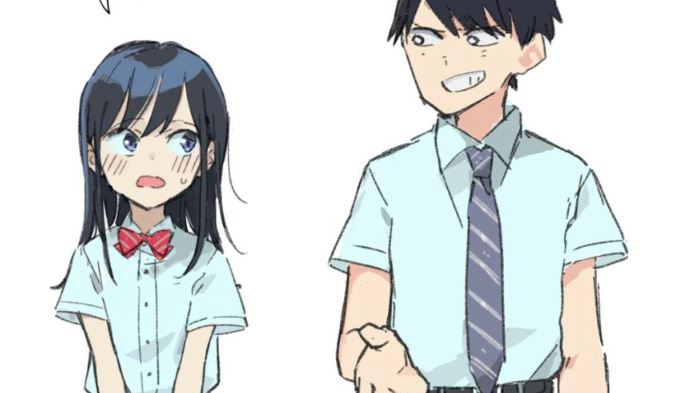 Eiji Kitahama is an upperclassman who wishes he could have a harem like the ones he sees in comic books, while Rin Nanakura (who secretly adores him) takes on a different “character” with a distinct personality every time she’s near him. Will she ever be able to be herself? and express her emotions for him?

Not much can be said about doujinshi manga, the story it’s as simple as it can get. The Characters are also not all that complex.  Overall, it’s a good read if you are in the mood for something cute, relatable, short, and sweet. 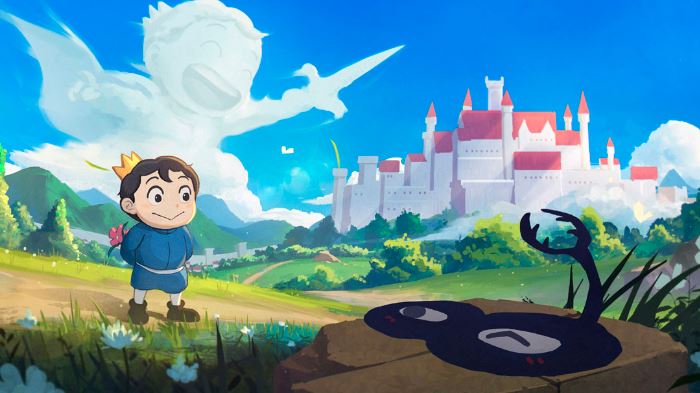 The story of this doujin manga sets in a world where kings are ranked based on many things: population, economy, the king’s leadership, etc.

King Bosse is ranked seventh among the hundreds of rulers in this fictional world. Everyone anticipated his son to be as powerful and big as his father… yet those expectations were not satisfied. Bojji, the first prince strives hard and dreams of becoming the world’s greatest king. However, our cute Bojji is dumb and deaf, but he compensates with his incredible ability to observe. He meets Kage, who was previously part of a clan of expert assassins, and they develop a beautiful connection. So, can Bojji achieve his dream with the help of his new friend?

Overall, the story is quite interesting,  the artwork is good and the characters are amazingly well developed throughout the plot. Hence, if you want to read a doujinshi manga full of drama, action, love, and amazing adventures! This is the one to go for. 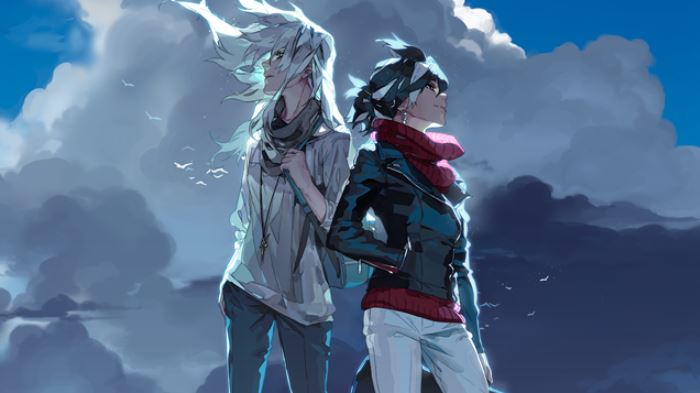 The story of this doujin manga centers around the stoic cellist, and the brazen conductor she fell for. Together, they navigate the slight dumpster fires that they somehow create out of their daily lives. Generally, the plot is good, the art is extremely beautiful and easy to look at. The characters have great chemistry and are actually funny. Give it a try if you are a fan of GL doujinshi manga.

3. The Guy She Was Interested in Wasn’t a Guy at All 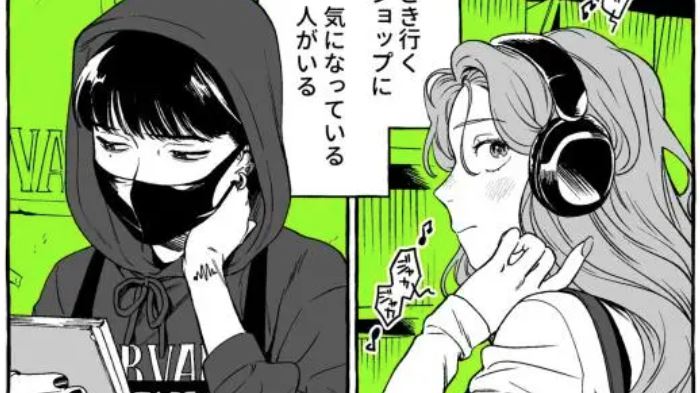 This famous Twitter shorts series depicts the love story between a Gyaru girl and her classmate who she mistakes as a boy outside of school, bonding over their mutual love for rock music. Generally, this is a cute, and adorable doujinshi manga to read. Also, the art and character design are amazingly done. Highly recommend keeping an eye on this one. 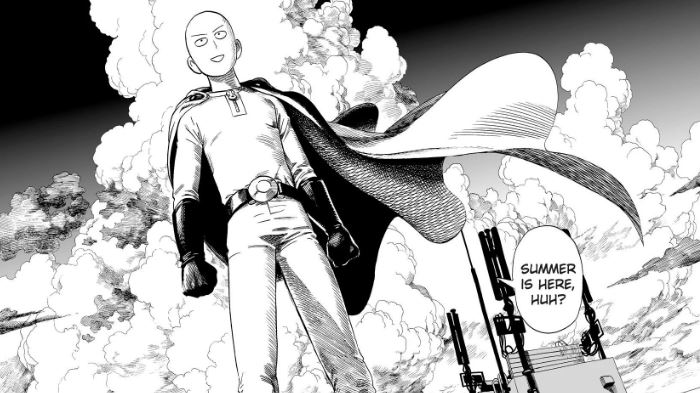 Saitama chooses to become a superhero for fun in a city overrun with gangsters, mutants, and supervillains. He imagines an exciting life where he is constantly challenged by tough opponents, but after three years of intense training, he’s become so strong that he can defeat any foe with a single punch! His ambition of confronting difficult opponents has gone up in flames, and his powerful existence is now filled with overwhelming dullness. Then a cyborg named Genos discovers Saitama’s incredible skill and begs him to become his student. Genos isn’t interested in taking on an apprentice since Saitama isn’t. Can he persuade the disillusioned hero to teach him the key to his power? Will Saitama ever find a good opponent to battle?

Not much to say about this doujin manga, if you did not read it yet then what are you waiting for?

1. Gap Papa: Daddy at Work and at Home 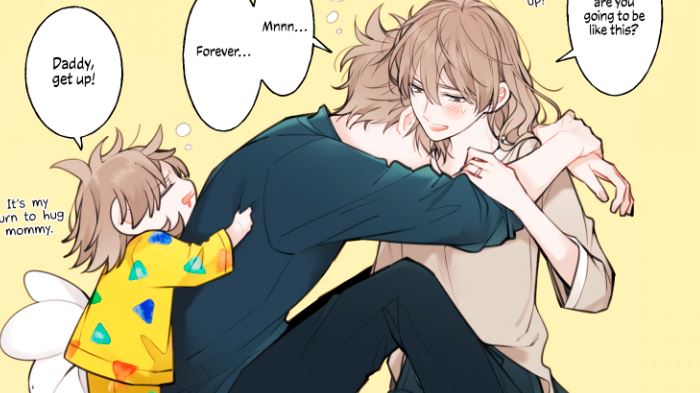 This doujinshi manga tells us the story of a salaryman, His coworkers describe him as beautiful, cold, and distant… When he returns home, though, this frosty-looking salaryman reveals his real colors as a devoted father and husband. What a contrast between his appearance and demeanor! Playing funny games with his small daughter, lavishing kisses on his adoring wife!

Overall, this is a charming full-color comic about a happy family that definitely will melt your heart.

We hope you did get some information about, Doujinshi manga. And we wish you found what you were looking for here! We wish that you enjoyed this list of The Best 15 doujin manga that you must read!